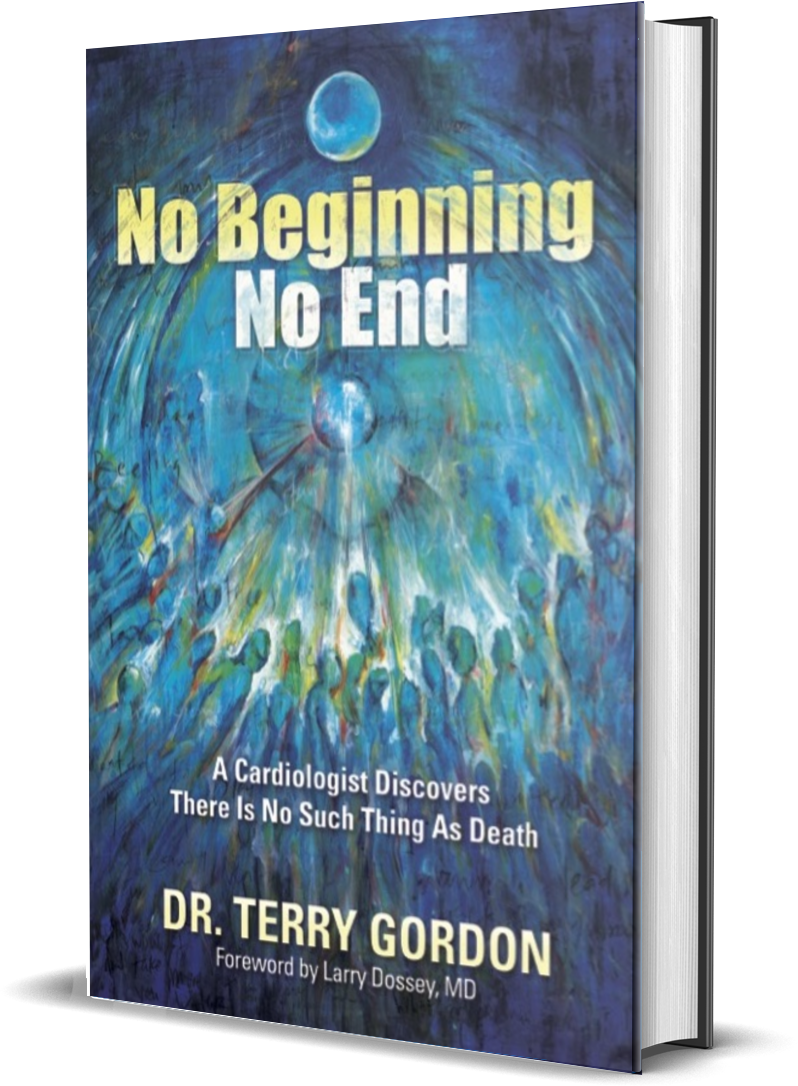 A Cardiologist Discovers There Is No Such Thing as Death

“A brilliant cardiologist, Dr. Terry Gordon has spent the better part of his adult life smack- dab in the middle of crises.” 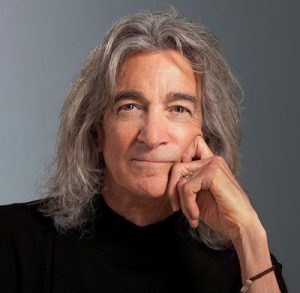 Imagine the liberating feeling if you no longer feared death. Wouldn’t it be easier to accept such a premise if you knew for certain that death didn’t signify the end of our existence?

That is exactly what Cleveland Clinic trained cardiologist and author Dr. Terry Gordon came to appreciate during an open-heart operation while cradling a patient’s beating heart in his hands. He experienced an epiphany when he first realized that the electrical excitation of the heart, its voice, travels like every other electromotive force in the Universe, at the speed of light, 186,000 miles per second. After only one minute, each heartbeat’s signal has the potential to travel more than 11,000,000 miles from its beacon point! And the electrical impulse doesn’t stop there. It continues—for eternity. This moment revealed to Dr. Gordon a profound truth: there is no such thing as death.

Through inspirational stories, profound wisdom and practical end-of-chapter calls to action,
No Beginning . . . No End takes the reader on a mesmerizing journey that deconstructs conventional concepts of life and death. As a heart specialist, Dr. Gordon’s unique perspective offers extraordinary wisdom, encouraging us not to fear death, but to embrace it as a continuation of life manifested in the form of the Soul.

New Book Weaves Scientific and Spiritual Truths about Death, Revealing That Dying Is Not the End of Life

“The fear of death can leave us deaf to the truth. In his new book, No Beginning…No End, Dr. Terry Gordon reveals a powerful truth: There is no such thing as death! “

Dr. Gordon’s comforting tone introduces readers to the idea that the transition toward death is a process ripe with enlightenment. It is a time to re-examine life lessons, to contemplate, to open our consciousness to deeper understanding. Just as the transition of Earth’s seasons, the process of aging from birth to death has a circular aspect to it. Death is simply the beginning of yet another chapter to be anticipated with enthusiasm.

“We have all been granted the gift of life, though the amount of time is uncertain,” Dr. Gordon explains. “Too many of us make the mistake of judging life not by its depth but erroneously by its length based on linear time. No matter how vigorously we protest, our stint in a particular incarnation is finite, a mere blink of the eye. In preparation for the next phase of life, we must not waste the opportunity. Instead, we must make the most of our current experience, comforted in the knowledge that the circle of life is never-ending.”

“As someone who has witnessed the glory of the heavens during three near-death experiences, I can guarantee that you do not need to die in order to understand the message conveyed by cardiologist Dr. Terry Gordon in this most courageous book. ”

No Beginning…No End provides powerful insight into the most elusive of life’s mysteries, understanding death beyond the temporal. He encourages us to awaken to our immortal nature sooner rather than later. While many become paralyzed by the fear of their own demise, Dr. Gordon delves deeply into explaining how the cyclical nature of life and death enables immortality to germinate from our mortality. He begins his engaging and practical book with a personal story of transition from skeptic to believer. He explores topics including the impermanence of life, near-death experiences, ego, after death communication, enlightenment, grief, overcoming suffering, navigating terminal illness, as well as reincarnation of the Soul and much more.

“A brilliant cardiologist, Dr. Terry Gordon has spent the better part of his adult life smack- dab in the middle of crises. He has been right there, often working feverishly throughout the night without any sleep, simply doing what he vowed to do when he took the Hippocratic oath. He is an accomplished member of the healing profession and someone I admire very much. Dr. Gordon is a dedicated man who has been in awe of the heart and its majestic role in our lives. I love him like a brother, with all of my heart.”

“The fear of death can leave us deaf to the truth. In his new book, No Beginning . . . No End, Dr. Terry Gordon reveals a powerful truth: There is no such thing as death! The marvelous wisdom and insight he shares are truths my ancestors, the Toltecs, have known for many centuries. This book will forever change your view of life—and death.”

“Respected cardiologist Dr. Terry Gordon has much experience, both professional and personal to lend great weight to his observations about life and death. His extraordinary book, No Beginning . . . No End, provides an immense gift to our troubled world—a gift of comfort and understanding about the grand evidence for the reality of the fundamental existence of soul and spirit based on a modern scientific interpretation of the evidence. In so doing, he presents a life-changing opportunity to those open enough to receive his grand wisdom. Highly recommended!”

E
Eben Alexander, MD, Neurosurgeon,
Author of Proof of Heaven and Living in a Mindful Universe

“As someone who has witnessed the glory of the heavens during three near-death experiences, I can guarantee that you do not need to die in order to understand the message conveyed by cardiologist Dr. Terry Gordon in this most courageous book. Concerned about the lack of spiritual preparation by too many of his patients, Dr. Gordon set out on a profound and altruistic journey to demystify death. No Beginning . . . No End offers a treasure trove of wisdom and insight—from the temporal reality of suffering, pain and grief to more controversial topics such as NDEs and the afterlife. In this must read book, Dr. Gordon articulates Truths that will transform your perspective of eternity.”

“Dr. Terry Gordon’s compelling new book No Beginning . . . No End explores beyond the physical aspect of death where our energy continues, affirming what our Soul already knows: death is the transformation of consciousness that endures forever. The wisdom gleaned from these pages will leave the reader with a deeper spiritual understanding of the preciousness of life and how to navigate this world fearlessly. This profound work should be required reading.”

“Dr. Terry Gordon’s No Beginning . . . No End is an absolute masterpiece that gives us a new lens for viewing death in its human and cosmic dimensions. Informed by his direct experience as a cardiologist and his evolving spiritual realization, his message shines a radiant light upon the continuity of consciousness. May its revelations bless and bring assurance to your heart.”

“Dr. Terry Gordon’s support for the public placement of AEDs has been of enormous value to our communities. His views on life and death in No Beginning . . . No End are bound to be of interest to many people.”

“Quantum physics, the most tested and validated of all the sciences, emphasizes that the non-physical energy field referred to as consciousness, shapes our worldly experiences. The greatest fear impacting human consciousness and its influence on health is the belief that death is a termination of existence, a conviction that has a profoundly negative impact on the character of our lives. In contrast, a belief in an eternal immortal existence (spirituality) has been scientifically shown to significantly enhance an individual’s vitality and health.

While most have had a very limited experience of dealing with mortality through the death of a relative or friend, cardiologist Dr. Terry Gordon has personally dealt with death in over a thousand patients. Though Dr. Gordon started his medical career as non-spiritual conventional scientist, his professional experiences have opened his awareness to the reality that death is simply a transition and not a finality.

In No Beginning . . . No End, Terry’s compilation of personal and patient experiences, in conjunction with modern scientific research, documents his evolution into the realm of spiritual immortality. This eminently readable book offers readers an opportunity to move beyond misperceived limitations and fears, so that we can write new empowering stories for ourselves, for our children, and for the world. Dr. Terry Gordon’s book is a valuable prescription for eliminating fear and enhancing health and happiness!”

B
Bruce H. Lipton, PhD, Cell biologist and
author of the bestselling The Biology of Belief and
Spontaneous Evolution

RECEIVE A FREE BOOK EXCERPT FROM NO BEGINNING…NO END

Thank you!
please click on the link below
for an excerpt of
Dr. Terry Gordon’s book.
No Storm Lasts Forever